I feel that honoring and appreciating nature is deep-rooted among the people of Japan. 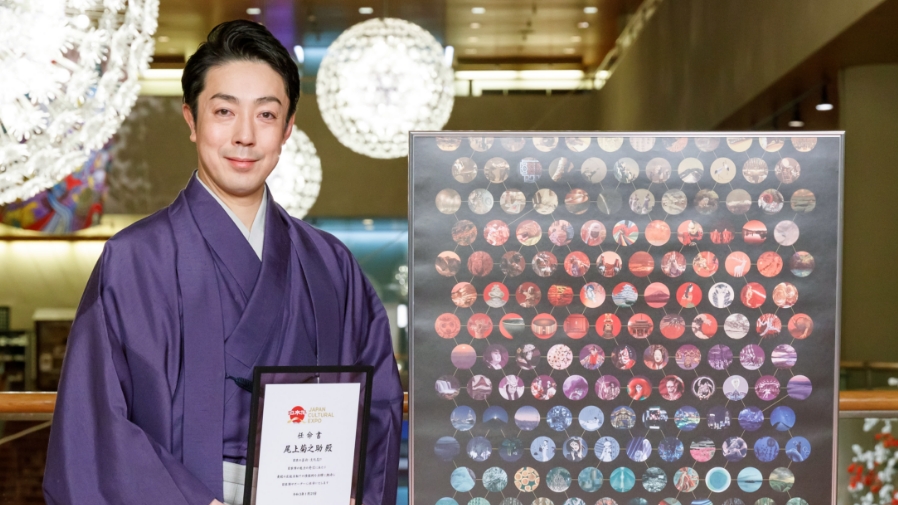 This interview with Kabuki actor Kikunosuke Onoe was held on occasion of his appointment as a Japan Cultural Expo Official Supporter. 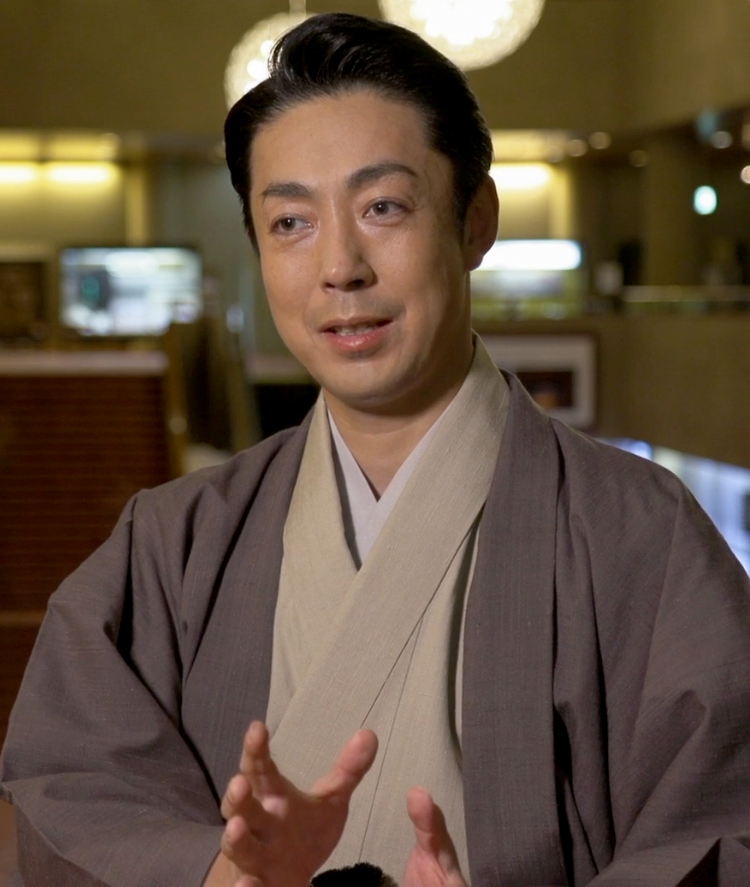 Q: As you have become an Official Supporter of the Japan Cultural Expo, I would like to ask you about nature. There seems to be many Kabuki performances focusing on nature. What do you think is the background for this?

Mr. Onoe:
Indeed, Kabuki performances value the four seasons, and there are plays representing each season. With spring, there is “Yoshitsune Senbon Zakura”, as well as “Kinkakuji”, which are themed around cherry blossom. There are “Ise Ondo” and “Natsu Matsuri Naniwa Kagami” denoting the hot summer, and there are also performances that symbolize something about the humid season. There are “Kiku-batake” and “Momiji Gari” for autumn, and “Sagi Musume” for winter, portraying the sublime world in snow. As such, there are numerous performances in Kabuki centered around the four seasons.

Q: And do you think this is because Kabuki itself was intended for ordinary people to enjoy during each season, so incorporating the seasons provided effective entertainment?

Mr. Onoe:
Yes, I think so. Although kabuki is nowadays a classic, this performing art was performed with a view to entertain the audience of the time. Japan values its four seasons, so the performances sought to allow the audience to experience the seasons by visiting the theater. By sharing the seasons together, I believe the stage and the audience were brought closer to each other.

Q: In Kabuki, nature is portrayed as being somehow divine with depictions of nature worship in the context of the four seasons. Are there also, in Kabuki, representing the awesomeness of nature?

Mr. Onoe:
Kabuki traces its origins to Izumo no Okuni, who danced the Nembutsu Odori. It is thought that she performed to express honor toward departed souls and to offer sacrifice to the deities. In Japan, it is believed that there are spirits reside in everything. I feel that Japanese people have deep-rooted appreciation for nature, dedicating themselves to those infinite gods. This appreciation of nature, honoring everything, treating it divinely, paying respect to everything, is deep-rooted among the people of Japan. 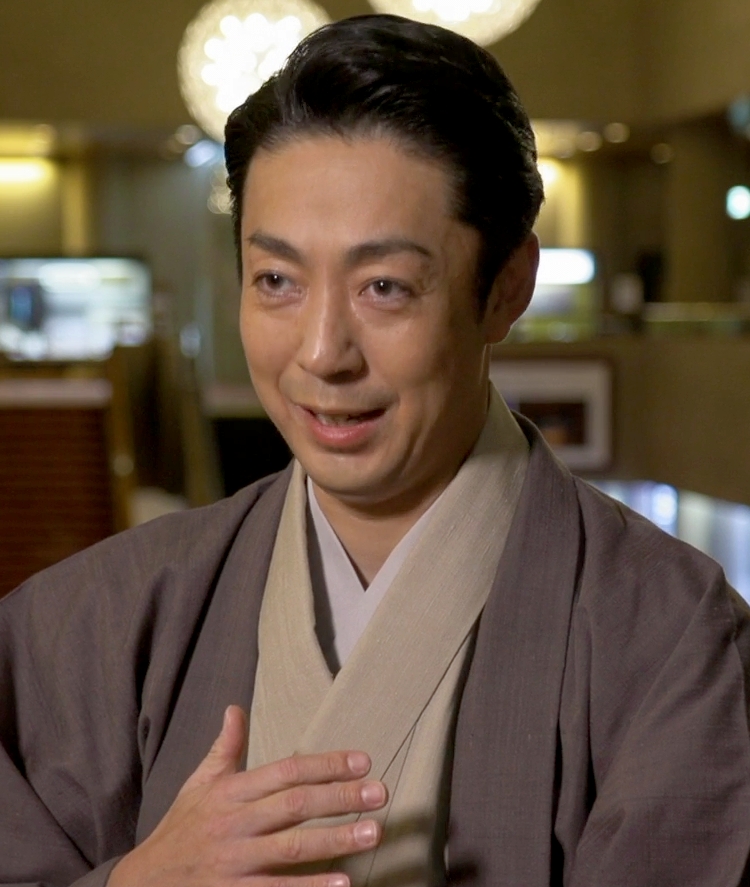 Q: When you perform, do you often play the roles with a feeling of respect for the characters?

Mr. Onoe:
Yes, when performing a divine character, or the sacred lions of “Renjishi”, I have this feeling that I am not a human. When I play a sacred lion, I do feel some kind of respect to the god.

Q: Focusing on the more familiar aspect of nature rather than the feeling of awe toward the gods and nature, were seasonal motifs incorporated in the programs? Kabuki originated in the Edo period when ordinary people lived more closely with nature, so are there scenes in Kabuki showing people enjoying nature (as I heard about the story of bonsai gardening by Kumagoro and Hachigoro)?

Mr. Onoe:
Yes, Kabuki was developed during the Edo period, an era of rich culture. Even ordinary people enjoyed bonsai gardening back then, much like the fictional Kabuki characters of Kumagoro and Hachigoro. This was the period when a culture of caring for plants and enjoying greenery among the whole community was developed. Of course, there was a feeling of awe toward nature, but there was also a great culture of gardening, with Japanese people putting their hands in nature, creating their own gardens. People in Japan were able to respect nature and enjoy it at the same time, turning it into an art form. I feel the cultural and artistic standards during the Edo period were very high.

Q: Nature appears to be a popular motif in Kabuki performances, with characters’ names often referring to the names of plants, such as Matsu (pine) and Ume (plum), or being reflected in the designs of kimono outfits worn by performers. Nature is a recurring motif in Kabuki culture.

Mr. Onoe:
There are various patterns in kimono designs. For example, seasonal flowers are associated with the princess characters, adding not only glamour, but also a sense of emotion to their roles. Among the characters that I have played, Sakuramaru in "Sugawara Denju Tenarai Kagami" even has the word cherry blossom (sakura) in his name, expressing a transitory and fragile beauty. There is a scene called “Ga no Iwai”, in which he commits suicide to take responsibility for the downfall of his lord. Sakuramaru’s costume, with falling cherry blossoms designed around the shoulder, represents the fragility of the loss of a young life, expressing the frailty of life and the character’s feelings. Today our performances are based on the ingenuity of our predecessors. I really feel that nature and the characters’ spirits are effectively depicted through their costumes. 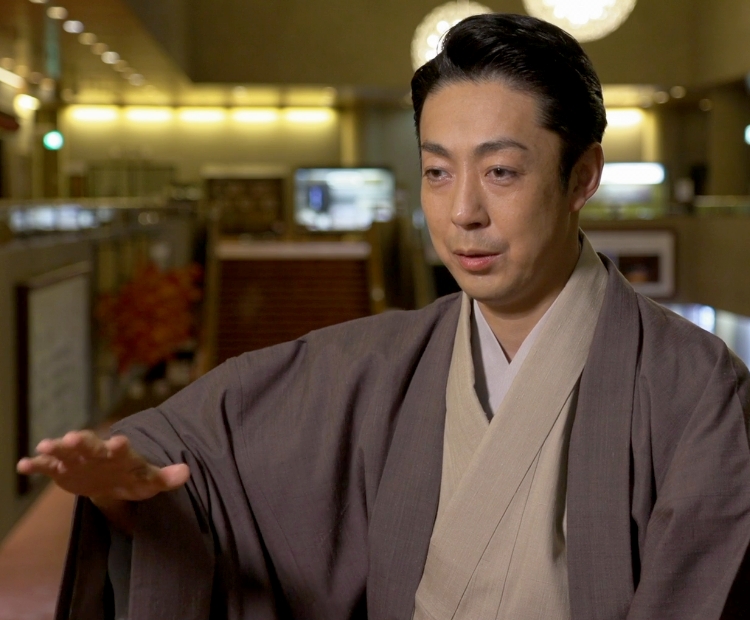 Q: Giving personalities to plants and nature, exploring their similarities, and adding them to the characters’ names – it’s an amazing technique, almost like another kind of art, by the people in Edo period.

Mr. Onoe:
They really lived closely with nature. In the costumes, we see designs such as a stream of water, mountains like the mythical Mt. Horai, and various seasonal flowers. For the character of Matsuomaru in a piece of “Sugawara Denju Tenarai Kagami (Sugawara and the Secrets of Calligraphy) ”, there is a costume depicting pines covered in snow, which implies he is covering his true intentions. It is really well thought out.

Q: The audience was also able to enjoy this along with the stage set depicting the scenery?

Mr. Onoe:
The audience came to enjoy the vivid world presented on stage, forgetting the real world. I believe they shared a moment of forgetting reality for a while.

Q: Would you also say that you foster some kind of feeling or enjoyment toward nature after you finish performing?

Mr. Onoe:
I do look forward to the cherry blossoms at the National Theatre every year. I sometimes get to perform during the season, but even when I don’t, I would come and drive around the Theatre to see the cherry blossoms, because they are just so beautiful. Also, I tend to experience the seasons through the world of tea. I still need to learn more about the tea ceremony, but I do enjoy the Japanese confectionery that is served. I enjoy both looking at and eating confectionery with seasonal motifs very much. It is very well-crafted. 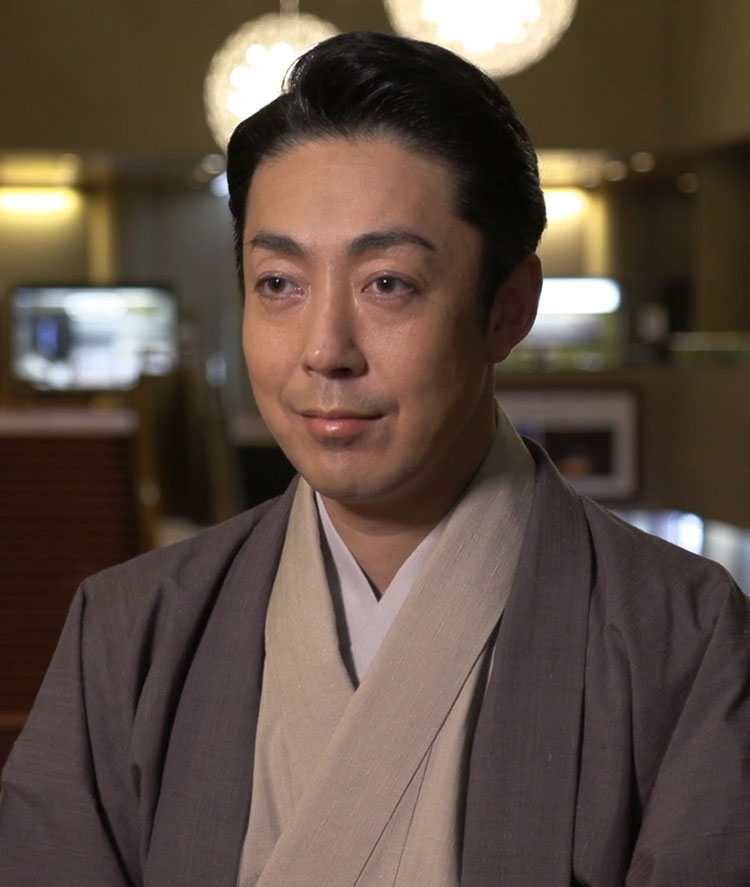 Q: As we just discussed with the portrayal of pines in kimono designs, there is a similarity of expressing into each single confectionery the Japanese people’s. . .

Q: As an Official Supporter of the Japan Cultural Expo, themed around the relationship between Japan and nature, is there anything you would like to tell everyone about the arts and sentiments of Japanese people?

Mr. Onoe:
This project was originally led by actor Tsugawa Masahiko, who has unfortunately passed away. There are various kinds of arts, from traditional Japanese performing arts, time-honored festivals across the country, to folk art and music, which may be unfamiliar even to Japanese people including myself. The Japan Cultural Expo is a wonderful project with all parts of the country working as one team. It enables people in Japan to rediscover the traditional arts, and to introduce them to the wider world. Embracing Tsugawa Masahiko’s wish, I hope to showcase Japan’s incredible culture to people around the world.

Q: With regards to Kabuki, is there anything you would like more people to know about, or any thoughts on how people abroad should enjoy Kabuki?

Mr. Onoe:
Fortunately, we hear from overseas as well that they would like to see more Kabuki. It has been difficult to perform overseas lately, but when we did travel, the audience showed great interest in the performances. Although there is a high hurdle in seeing live performances in the current circumstances, I proudly believe that we could offer some kind of thrill, excitement, and interest, once we could have everyone visit theaters again to experience Kabuki. There are three main categories in Kabuki: dance performances, drama depicting everyday life, and drama depicting historical events. Honestly, any one of these would be fine. I just want everyone to experience live Kabuki and get the feeling of what has been passed down for over 400 years. Performers today do not stand on the stage to merely present what has been passed on. We care what today’s audience expect, what they want to see. On stage, we portray where the classic and modern streams meet. Thus, I believe the audience would enjoy Kabuki as a contemporary and living theater play rather than as something archaic.